The participants in the workshop were mainly the officers involved in implementation of solar rooftop in over 77 DISCOMs across India. The workshop was also be attended by officers from Ministry of New and Renewable Energy, National Institute of Solar Energy, Solar Energy corporation of India, IREDA, SBI, PNB, World Bank, ADB, USAID, GIZ, KfW and other organizations. 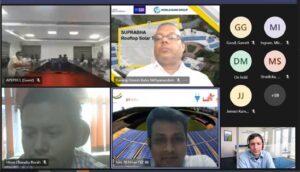 Focusing on the DSO perspective, he stated that today Germany’s typical distribution system is operated (almost) without monitoring of PV. As the distribution system changes from pure consumption to a production system with bi-directional load flows, distribution grid monitoring will become very important in the future. Not only due to PV, but also because of other new consumers (e.g. electric vehicles, storage, heat pumps, air conditioning).

On the short run, for larger systems (>100 kWp) in Germany it is expected that the distribution system will be monitored for Redispatch 2.0 and on the long run, smart meter data will be used for monitoring, also enabling the operation of smart grids.

Find more information on Smart Meter Gateways in these news.