Driving emission-free and contributing to the integration of renewable energies

Electric vehicles receive their energy from a battery. In contrast to vehicles with a traditional combustion engine, electric cars are refueled via the power grid. Provided that the electricity is generated from renewable sources, electric cars run emission-free and do not emit any CO2.

A nationwide charging infrastructure: A challenge for the power grid

A nationwide charging infrastructure is a necessary requirement for a rising number of electric cars. Since March 2017, the expansion of the charging network is supported by the German Government. This ensures a rising number of charging stations but also poses a challenge to the power grid. Simultaneous and uncontrolled charging of many electric cars can result in electricity system overloading issues. Therefore, an organized and structured expansion of the charging infrastructure is important, and locations of charging stations have to be chosen carefully. In addition, the power grid can be relieved by coordinating the charging of several cars. The charging stations in an underground parking, for example, can reduce the charging power intelligently if the grid is in danger of overloading because of too many cars charging simultaneously. Thus, the impairment of the users can be kept to a minimum.

Electric cars as a storage in the smart grid

By using a bidirectional charging system, it is possible to discharge the battery of electric cars and to feed power back into the grid. In this way, electric vehicles can be used as a home storage system in order to optimize self-consumption, and to balance out fluctuations in the power grid. During times of excess solar and wind power generation compared to the consumption, charging the battery leads to a smoothened infeed peak and the curtailment of renewable energies can be avoided. If the demand is high, the vehicle can feed energy back into the grid. Thus, electric cars can contribute to integrating renewable energies, and constitute an additional component in smart grids. Intelligent concepts for controlling the charging or discharging power are necessary.

A Selection of our Broad Service Portfolio. 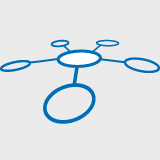 Smart Grids need to fit your operation and your objectives. We take care of that! By means of custom-fit control algorithms and competent, manufacturer-independent consulting services.